No, not these chicks

One of the things G and I miss most from Washington, DC is living down the street from Zorba’s and being able to stop in anytime for freshly made hummus and falafel. We had been talking about trying to make our own for a while now, so the cravings for Zorba’s finally prompted me to pull out the recipe and get started. On recommendation from Kath, I save my recipes online for free with springpad, which is a total lifesaver. It will automatically pull the recipe you want directly from the Web page and then you have it on file wherever you go (aka California).

We cobbled our recipe together from one I originally found in the Washington Post and this one that came highly recommended from Epicurious. Whenever you’re trying something new, check out Epicurious. Even if you don’t end up using the exact recipe, the reviews from other users have great tips for say, how to crisp up your falafel without turning them into rocks.

As Good as Zorba’s Falafel

Instructions:
Soak the dried chickpeas for 24 hours. They will expand considerably. Apparently this is why you save so much money by using dried instead of canned. Notice the difference in the soaked chickpeas and dried:

Put the chickpeas, scallions, and garlic in a food processor. Pulse the chickpeas in the food processor until they are broken up, but not at their final stage (paste). Add the spices and parsley then process until it forms a paste. (Epicurious tip: Adding the parsley at the end keeps it from turning too green) Transfer to a bowl and mix in the baking powder. 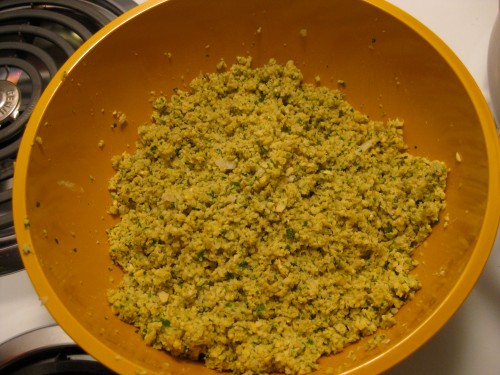 Refrigerate for one hour. Apparently, this step is pretty necessary so we followed instructions. Form into balls. We made ours slightly bigger than suggested and were able to make 17. I thought this size worked perfectly.

Heat one inch canola oil in a saucepan over medium heat. We tested out one falafel ball first to adjust the temperature appropriately. Fry the balls for three seconds on each side until crispy. Note, in your test ball, you want to make sure that your falafel is crisping on the outside and cooking throughout, while still keeping it nice and soft on the inside.

When cooked, remove the balls with a slotted spoon and drain them on a paper towel.

Enjoy on a salad or stuffed into a warm pita with crunchy raw toppings and homemade hummus. We used parsley, radishes, tomatoes, cucumbers, and raw onion strips (for G).

Easier than you thought, huh? Here’s where I semi f-ed up. I didn’t realize you need to soak chickpeas before cooking them for the hummus. Apparently, if you don’t soak them before cooking them, you ahem, may find that you experience some unpleasant side effects. Like blowing your roommate out of the apt with gas. G wasn’t into that so we made a quick trip to the store to pick up some canned chickpeas. I was bummed, though, since I went so far as to try out expensive raw, tahini, and then had to settle for canned chickpeas. Next time.

Instructions:
Process all in a food processor. Thin out with the water as needed to get the desired consistency.

Add the hummus to your falafel pita and feast on a delicious Mediterranean meal worthy of Zorbas.

And don’t forget the wine! We had a Zinfindel from Ravenwood, one of the wineries from our Sonoma trip. Before this winery, I would have told you I didn’t like Zinfindel. This $35 bottle changed my mind about Zin for good. Not only was it excellent, it was the PERFECT combination with the Greek feast. Let me know if you guys try out your own falafel!

This entry was posted in Recipes. Bookmark the permalink.